This Year's Most Essential Bit Of Kit For Endurance Running 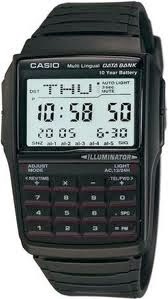 In a bid to embrace change in 2014, as well as improve my running performance, I decided to tackle my distrust of modern technology head-on over the Christmas period and splash out on a wrist-worn device that I could wear during training sessions. After browsing the internet for products within my price range (less than £25), I decided to invest in the gadget with the longest name I could find, reasoning that a long name equates to great performance.

I have now worn my Casio DBC-32-1AES Auto Illuminator Databank watch on all my runs for the last two weeks. I have also worn it at all other times, even in the shower, but I did take it off when I had a bath the other night, just to be on the safe side.

Below is my in-depth review of my new purchase. I hope you find it informative. If you should have any questions after reading the review, please leave a message in the Comments section and I will do my best to help you out.

The Casio DBC-32 (for short) is black, sleek and slimline. When attaching it to your chosen wrist (fits left or right wrists), its slightly curved contours ensure a precise and comfortable fit. This is one good-looking timepiece.

Weighing in at a barely-there 32g, it is a whole 45g lighter than its nearest comparable training tool (Garmin Forerunner 205, 77g). Scientific studies have shown that each gram worn on the wrist equates to approximately a 0.5 second decrease in long-distance performance over 100 miles. By wearing a Casio DBC-32 instead of a Garmin Forerunner 205, a typical athlete will save themselves up to 23 seconds in a 100 mile race.

Not only is the Casio DBC-32 very light and well-fitting, but it is also seriously cool when worn as a casual timepiece outside of running. Its futuristic styling coveys the message that its wearer is forward thinking, up-to-the-minute, and individualistic.

Other prominent fashion writers have predicted that the Casio DBC-32 will become hip in 2014, after numerous celebrities have been spotted wearing them. These include the bloke in 'Breaking Bad' who was a teacher but started cooking up drugs to sell to his pupils, and Rob Halford, lead singer of ground-breaking Heavy Metal outfit, Judas Priest.

The Casio DBC-32 has a multitude of functions:

1. TIME - handy if you want to know what time of day it is. By pressing just one button, you  can change the display from a 12 hour clock to a 24 hour clock.

2. STOPWATCH - handy for timing things, eg. the duration of a training run, how long you can hold you breath without becoming unconscious, when to turn the microwave off when preparing a tasty ready-meal-for-one.

3. DATE - handy if you're competing in an extreme endurance ultra that lasts more than 24 hours.

4. LIGHT - handy if you want to use any of the functions of your wrist-worn training tool in the dark.

5. DATABANK - this feature enables you to enter and save a long list of people's names and their phone numbers. Handy if you should wish at any time to recall someone's phone number but don't have access to your mobile phone.

6. CALCULATOR - handy for working out any stuff involving numbers.


How has it performed?

A).
I've used the stopwatch function on a total of 20 runs and found it to be most effective.

A detailed breakdown of this training data reveals:

- On 6 occasions I used the stopwatch function on the same 10 mile route. Results show that on each occasion I ran the distance in a slightly different time.

- On 8 occasions I forgot to stop the watch after completing a run, rendering my run data obsolete.

- On 4 occasions I got half way round my course before realising that I'd not started the stopwatch, rendering my run data obsolete.

- On 2 occasions I started the watch at the commencement of a run, but on completion of the run found that I'd caught the STOP button by mistake during the run, rendering my run data obsolete.


Although I haven't yet explored the following, it is obvious that, for those of you of a more analytical bent, the stopwatch function can be extended for use in a host of informative ways:

- If you've previously measured the length of your course using a calibrated bicycle wheel or the speedo in your car, you can use the figure provided by your stopwatch, along with the Casio DBC-32's Calculator function, to perform a simple arithmetic equation to work out your average pace.

eg. The course is 5 miles long. Your total time was 35 minutes.

A Garmin device will also provide this information, but cost, on average, £100 more.


- After gathering information of this nature over several days, it is then possible to buy some graph paper from WH Smith's and plot your training data in a chart. Such a chart is very effective as a means of performance feedback and looks just as pretty as the graphs on Garmin Connect, especially if you've invested in a large pack of coloured pencils.


- Should the above personal feedback not be satisfying enough, it is possible to collate all the training data provided by the Casio DBC-32's stopwatch function and post it all on Facebook, along with a comment chosen from the following list:

'Great long run this morning. Felt fantastic!'
'Marathon training starts today!'
'Thanks (insert name/names of your choice) for helping me get round those (insert number) miles. Very tough. but glad I did it!'
'After this morning's run, I really enjoyed eating this cake. Nom nom. lol.' (Post comment and data along with a photograph of a cake.)

By posting such information on Facebook, not only will you get all the external validation you need to feel worthwhile (somebody's bound to 'like' it, even if it's just through the guilt of potentially upsetting you), but it may also serve the handy purpose of making your running rivals jealous, or, even better, just winding them up.

B).
The watch's Light function has performed admirably on a number of occasions. In order to test its effectiveness, I ran to the middle of nowhere on an unlit road round the back of my house. After turning off my headtorch to ensure total darkness, by pressing the Light button, I was clearly able to read the time on the watch's digital display.

On an early morning off-road run to work this week, I found myself in considerable difficulty when my headtorch battery failed, resulting in a loss of visibility. Temporarily unable to find the path across the ploughed field I was in, I activated the Casio DBC-32's Light function. The resulting glow made it possible for me to re-find the path and navigate myself to a near-by road. Without the watch, and given the chilly air temperature at 6 am, I dare say the situation could have been very serious.

The Casio DBC-32's Light function also performs well in a non-running environment. Just last night, I was able to use the watch's light to locate a pound coin that had fallen behind the back of the fridge. Whilst there, I was also able to retrieve a discarded hair scrunchie, a medium sized safety pin and a black sock.

C).
I have used the Casio DBC-32's Calculator function numerous times to work out hard sums and found the buttons easy to use, and the answers displayed to be very accurate.

I intend to make extensive use of the Calculator function of the watch during my running this year.

In 2012, I completed the Viking Way Ultra, a 147 mile footrace through Lincolnshire and Leicestershire. At numerous checkpoints, when provided with the information of 'miles completed', I had to use mentally-draining arithmetic to work out the number of miles still to complete. Whilst this was do-able in the early stages of the race, once exhaustion set in, I found this task increasingly difficult. If I had had access to the Casio DBC-32 during this race, this matter would never have been an issue - I could merely have used the calculator on my wrist to work out the answer to my problem. I envisage the Casio DBC-32 will be invaluable in any races I compete in this year where the total mileage is 100 miles or more.


Over recent months, I have been researching the complex issue of 'association' and 'dissociation' during endurance races, in a bid to determine which cognitive coping strategy to utilise in an ultra.

Both these psychological strategies involve what you think about when running.

Athletes who dissociate, however, may think about things unrelated to the task at hand as a means of distraction. These dissociative thoughts could include reflection on past events or planning for future events. Runners who focus on the environment (scenery, the nice arse in tight, skimpy shorts in front of you etc.) or listen to music while running are also dissociating.

On the other hand, Morgan (1981) found that many elite runners drifted between styles, even during the same run. Gill and Strom (1985) also found that athletes in general do tend to rate dissociation as a preferred state during endurance exercise.

Whilst it is undoubtedly true that an associative state is conducive for peak performance up to and including the marathon, it has been postulated that utilisation of both associative and dissociative cognitive strategies together could lead to increased performance in extremely long ultra races. Indeed anecdoctal evidence shows that even the world's best long distance athletes - Killian Journet, Timothy Olsen, Ryan Sandes, to name a few - will run whilst listening to music through earphones on certain sections of the races they compete in.

Bearing all this evidence in mind, the Casio DBC-32 will play a vital role in both the preparation for this year's main target race, and during the actual race itself. Since I dislike listening to music whilst running, I plan on using my new watch's Calculator function extensively at the times during a run when I think the employment of a dissociative cognitive strategy will be beneficial to my overall performance.

Whilst I'm still to fine tune my 'dissociative technique', I plan on using mental arithmetic and complicated mathematical problems as its backbone. Whenever I judge the use of dissociative thoughts to be necessary during a very long run, I will focus my mind on the setting, and the subsequent solving, of very hard sums in my head. Once I've arrived at an answer, I shall be able to use the Casio DBC-32's Calculator function to check my answer.

By this means, I not only aim to drastically improve my running performance, but also to increase my level of mathematical mental agility and, thereby, my overall intelligence. I can think of no other running-related gadget on the market at the moment which is better suited for this task.

At 323.97, the Casio DBC-32-1AES Auto Illuminator Databank watch is probably the best value piece of running kit you could purchase this year.

I wholehearted recommend it and award it a mark of 9 / 10.